Vienna on the Danube is Austria’s largest city as well as its capital. This charming city is also knows as the “City of Music” as well as the “City of Dreams”, being home to the infamous Sigmund Freud. Located in the northeastern section of the country it is situated on both sides of the Danube River. Vienna has been ranked at the very top of the “most live-able” cities in the world, an honor that has been sustained each year since 2005. 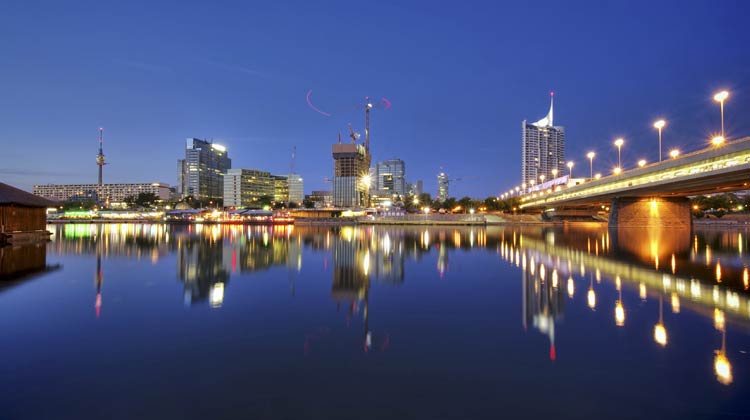 Classified as the most prosperous city in the world by UN-Habitat, some 6 million tourists a year visit Vienna on the Danube. Drawn by Vienna’s moderate climate of average temperatures of 70° – 80° in the summer months and mild spring and autumn temps, Vienna is an ideal port of call for our Danube River Cruise guests.

Both Art and Culture excel in Vienna, as the home to such luminaries as Mozart, Beethoven, Schubert, Brahms and Haydn, to name a few. Imagine walking down the same walkways and streets as these great artists and you can begin to feel just how special your time in Vienna will be. Home to several of the world’s greatest theaters and opera houses, such as the Burgtheater, the Staatsoper, and the Volksoper, Vienna hypnotizes its guests with a full range of cultural experiences.

There are a multitude of Museums in this great city from the Imperial Treasury protecting the imperial jewels of the Hadsburg dynasty to the Museumsquartier, where you can visit the MUMOK, the Museum of Modern Art as well as the Leopold Museum and the AzW, the Museum of Architecture. The Art Nouveau movement is well represented in Vienna by the Secession and Karlsplatz Stadtbahn Station.

No visit to Vienna is complete without experiencing Weiner Schnitzel, which is a flattened cutlet of veal, coated in flour, egg, and breadcrumbs and then fried in butter. Vienna’s deserts include Strudels, sweet pancakes known as Palatschinken and the luscious Sachertorte, a moist chocolate cake with apricot jam. Bratwurst, Burenwurst, and of course Frankfurters are readily available from street-side vendors.

Vienna on the Danube is known as the wine capital of the Danube. It is one of the few world capital cities with its own vineyards producing wine which is served in numerous pubs know as Heuriger. And the beer! Vienna is home to a single large brewery, Ottakringer, as well as an ever expanding list of microbreweries. For you coffee lovers, be sure to visit Viennese Cafes known throughout the world for their exceptional coffee and ambiance.

If your Danube River Cruise takes you to Vienna, Austria, your time in will be well spent and provide you with memories to last a lifetime.

Budapest on the Danube, is Hungary's stunning capital located in the center of  beautiful Hungary. This romantic city is bisected by the … END_OF_DOCUMENT_TOKEN_TO_BE_REPLACED

Durnstein on the Danube is known as Austria's "Pearl of the Wachau". Durnstein Castle, where Richard the Lionheart was held captive, sits on the banks … END_OF_DOCUMENT_TOKEN_TO_BE_REPLACED

Passau on the Danube is also know as the City of Three Rivers!  It is the magical place where the Danube is joined by the Inn and Ilz Rivers. The … END_OF_DOCUMENT_TOKEN_TO_BE_REPLACED

Bratislava on the Danube, also known as Beauty on the Danube is the capital of Slovakia and an interesting and historical port on your Danube River … END_OF_DOCUMENT_TOKEN_TO_BE_REPLACED

Linz on the Danube is the beautiful capital of the state of Upper Austria. Austria's 3rd largest city is known as the UNESCO city of Media Arts. Linz … END_OF_DOCUMENT_TOKEN_TO_BE_REPLACED