The Danube forms a national border between Austria, Hungary and Slovakia. Formerly part of Czechoslovakia and under Communist party rule until 1989, Slovakia became an independent country on January 1, 1993. The Danube is the largest river that flows through Slovakia. 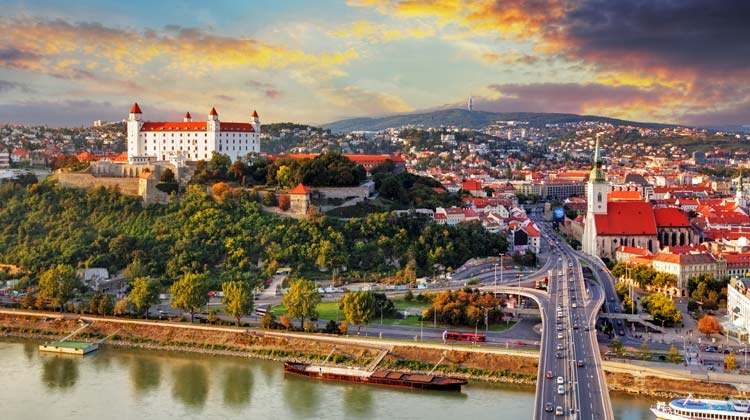 Johann Strauss composed the first verses of his waltz, Blue Danube in Bratislava in 1852. The cultural life in Bratislava, Slovakia ranges from the visual arts to opera and ballet. Art from Medieval to contemporary is on display at the city’s numerous galleries and museums. A vibrant cafe scene in the pedestrian only Old Town will give you a chance to people watch while enjoying a snack or coffee.

Slovakian cuisine is based around potatoes, cabbage, sausages, cheeses, pork, chicken and beef. One of the best dishes to try is sheep cheese dumplings, one of Slovakia’s national dishes. Dumplings made of potato and stuffed with sheep cheese are topped with onion, bacon and sour cream and will fill you up quickly!

Drinks to try include Urquell, a pilsener beer as well as Mustaz, an “American Wheat Ale”. Kofoloa which is like a cola with coffee and lemon is the most popular drink. Wines which come from the areas along the Danube are on the sweeter side including Tocaj, a white wine and there is also an apple cider, Opre.

If your Danube River Cruise is during the spring or summer, be sure to try the outstanding fruits as well as smoothies available.  Poppy seed (Makovník) and walnut rolls (Orechovník) should definitely be on your desert menu.

River cruising to Slovakia on the Danube is the best way to see this country and experience what it has to offer.

Whether your choose Ama, Viking, or Uniworld, your time spent in Slovakia on the Danube will give you memories for a lifetime! 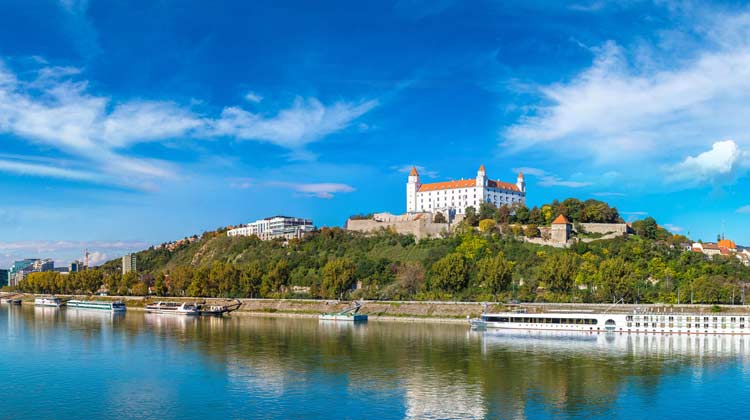 Slovakia on the Danube River Cruising

Budapest on the Danube, is Hungary's stunning capital located in the center of  beautiful Hungary. This romantic city is bisected by the … END_OF_DOCUMENT_TOKEN_TO_BE_REPLACED

Durnstein on the Danube is known as Austria's "Pearl of the Wachau". Durnstein Castle, where Richard the Lionheart was held captive, sits on the banks … END_OF_DOCUMENT_TOKEN_TO_BE_REPLACED

Passau on the Danube is also know as the City of Three Rivers!  It is the magical place where the Danube is joined by the Inn and Ilz Rivers. The … END_OF_DOCUMENT_TOKEN_TO_BE_REPLACED

Bratislava on the Danube, also known as Beauty on the Danube is the capital of Slovakia and an interesting and historical port on your Danube River … END_OF_DOCUMENT_TOKEN_TO_BE_REPLACED

Linz on the Danube is the beautiful capital of the state of Upper Austria. Austria's 3rd largest city is known as the UNESCO city of Media Arts. Linz … END_OF_DOCUMENT_TOKEN_TO_BE_REPLACED