Passau on the Danube is also know as the City of Three Rivers!  It is the magical place where the Danube is joined by the Inn and Ilz Rivers. The history of this great city is amazing. Passau was part of the Roman Empire for some 400 years. In 739 AD, Boniface, an English Monk founded the diocese of Passau. During the Renaissance, Passau became the center of sword manufacturing in Germany. Then after a fire consumed most of the city in 1662 the town was rebuilt in the Baroque style. 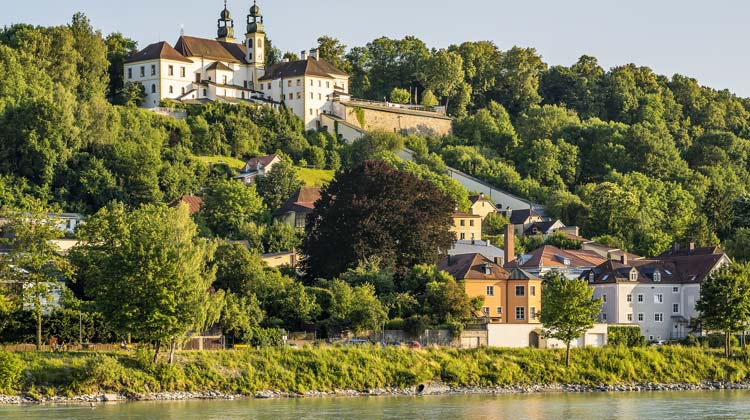 For river cruisers, the most memorable sites focus primarily on the banks of the three rivers. St Stephen’s Cathedral has the second largest church pipe organ in the world. If you are lucky enough to sail in the summer, Organ music fills the air as concerts are held between May and September at St. Stephens Cathedral.

Passau is dominated by the Veste Oberhaus, located on the mountain crest between the Danube and the Ilz. Originally built in 1219, it was renovated and expanded many times over the centuries. Napoleon utilized Veste Oberhaus during his campaign against Austria. It is presently under the ownership of the city of Passau and operates a museum, the Oberhausmuseum as well as a restaurant, an observatory, and an 18th century Observation Tower.

Built around 1200, the Scharfrichterhaus, (Executioner’s House) is now a cabaret and jazz stage.There is also a restaurant and cafe, modeled after a 19th century Viennese coffeehouse.

There are several restaurants of note in Passau. Bouillabaisse, in old town Passau is a must if you are a lover of seafood. For proper Bavarian pastries, Cafe Simon is the place to go. Heilig-Geist-Stiftschenke is your restaurant for schnitzels and if your are a vegan, Selly’s Vegan Bar will be your number one choice in Passau.

Germany’s Passau on the Danube is a paradise for lovers of walking and cycling. Romantic promenades, winding lanes and town squares provide vistas and enjoyment for all Danube river cruisers.

Budapest on the Danube, is Hungary's stunning capital located in the center of  beautiful Hungary. This romantic city is bisected by the … END_OF_DOCUMENT_TOKEN_TO_BE_REPLACED

Durnstein on the Danube is known as Austria's "Pearl of the Wachau". Durnstein Castle, where Richard the Lionheart was held captive, sits on the banks … END_OF_DOCUMENT_TOKEN_TO_BE_REPLACED

Passau on the Danube is also know as the City of Three Rivers!  It is the magical place where the Danube is joined by the Inn and Ilz Rivers. The … END_OF_DOCUMENT_TOKEN_TO_BE_REPLACED

Bratislava on the Danube, also known as Beauty on the Danube is the capital of Slovakia and an interesting and historical port on your Danube River … END_OF_DOCUMENT_TOKEN_TO_BE_REPLACED

Linz on the Danube is the beautiful capital of the state of Upper Austria. Austria's 3rd largest city is known as the UNESCO city of Media Arts. Linz … END_OF_DOCUMENT_TOKEN_TO_BE_REPLACED