Budapest on the Danube, is Hungary’s stunning capital located in the center of  beautiful Hungary. This romantic city is bisected by the Danube itself. Buda, the quieter and more residential half of the city sits on the hilly west side of the river. Pest, the bustling city center, filled with culture, entertainment and life is situated on the flat plain on the Eastern side of the Danube.

The climate of Budapest is absolutely ideal for your Danube River Cruise, as the typical temperature in Spring and Fall hovers in the 50’s with the summer months in the lower 70’s. Since so many of the important and historical sites are within walking distance of your cruise ship dock, these pleasant temps lend themselves to exploration by foot. Or, if you are on one of the Danube river cruises that supplies bicycles, the weather could not be more perfect!

Budapest is an architectural dream come true. The buildings and structures span the centuries starting with ancient times as the Roman City of Aquincum.  The Gothic era is exemplified by buildings in the Castle District, and the Renaissance Period is seen in St. Stephen’s Basilica. Ottoman architecture flourished during the Turkish occupation in the mid 1500’s to 1600’s and then was succeeded by Baroque and Neo-Classical. Art Nouveau in the late 1800’s was followed by stark Communist flats and then into Contemporary Architecture such as the National Theatre.

Since Budapest on the Danube is a World Heritage Site, and rules govern the preservation of this historic city, there are very few buildings over 150 ft in height, making this wondrous city an architecture lover’s paradise! The photo ops in this magnificent country will take your breath away. 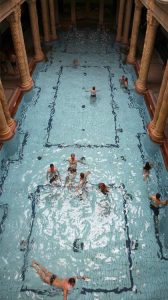 Now, after you have walked the streets of this charming city it may be time for a little R&R! Budapest is one of only two world capitals with thermal springs and that gives us the rare opportunity to experience Turkish Bathhouses! The famed Kiraly Baths and Rudas Baths are world renowned and date back to the 16th century. They are just two of the many bathhouses and spas in Budapest. There is no question that a visit to the baths is exactly what you need to top off a true Hungarian experience.

The city of Budapest is filled with parks and green spaces encompassing forests, lakes and streams. The Budapest Zoo and Botanical Garden established in 1866 is located in the City Park. There are 7 islands on the Danube in Budapest, such as Margaret Island which is mostly a park in itself.  It is a perfect recreational excursion for both tourists and locals alike.

Budapest has over 220 museums and galleries, most notably the Museum of Fine Arts and the Hungarian National Museum. The city has over 800 monuments that span the vast range of European styles. Imagine the pictures you will take as you walk this art-filled city.

Budapest has her own unique cuisine, a melting pot of French, Austrian, German, Slavic, Italian and ancient Asiatic influences. How about a visit to Café Gerbeaud, one of Europe’s most important coffeehouses? Or to Gundal, located in City Park where you can experience Palóc soup, their own take on Goulash. Let’s not forget Chicken Paprikash! A staple in every true Hungarian restaurant!

Ahhh! The wine!  Hungary is known for their famous Tokaji wine. Once one of the most important wines in the world, enjoyed by noblemen like Peter the Great, King Louis XIV, Catherine the Great and so many more it was considered an elixir of the gods! Sweet, delicate and luscious, it is a must try while in Budapest!

Budapest on the Danube, one of Europe’s and the World’s great treasures will provide the Danube River Cruiser with experiences to last a lifetime.

Budapest on the Danube, is Hungary's stunning capital located in the center of  beautiful Hungary. This romantic city is bisected by the … END_OF_DOCUMENT_TOKEN_TO_BE_REPLACED

Durnstein on the Danube is known as Austria's "Pearl of the Wachau". Durnstein Castle, where Richard the Lionheart was held captive, sits on the banks … END_OF_DOCUMENT_TOKEN_TO_BE_REPLACED

Passau on the Danube is also know as the City of Three Rivers!  It is the magical place where the Danube is joined by the Inn and Ilz Rivers. The … END_OF_DOCUMENT_TOKEN_TO_BE_REPLACED

Bratislava on the Danube, also known as Beauty on the Danube is the capital of Slovakia and an interesting and historical port on your Danube River … END_OF_DOCUMENT_TOKEN_TO_BE_REPLACED

Linz on the Danube is the beautiful capital of the state of Upper Austria. Austria's 3rd largest city is known as the UNESCO city of Media Arts. Linz … END_OF_DOCUMENT_TOKEN_TO_BE_REPLACED